Explorations in math and music

I’m a mathematician, musician and software developer based in Aarhus, Denmark, and this website is a journal for communicating my work and thoughts. 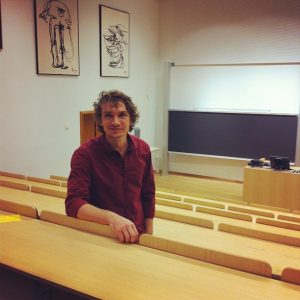 Lorenz-6674089274190705457 (Seltsamer Attraktor) is an ambient music track released by Morten Bach and me. It was composed algorithmically and recorded live in studio using a number of synthesizers. This post will describe how the track was composed.

The Lorenz system is a system of ordinary differential equations

where \sigma, \rho and \beta are positive real numbers. The system was first studied by Edward Lorenz and Helen Fetter as a simulation of atmospheric convection. It is known to behave chaotically for certain parameters since small changes in the starting point changes the future of a solution radically, an example of the so-called butterfly effect.

The curves are computed numerically. Above we show an example of a curve for t \in [0, 5]. The points corresponding to a discrete subset of the three curves we get from the given seed are mapped to notes. More precisely, we pick the points where t = 0.07k for k \in \mathbb{N}.

We consider the projection of curves to the (x,z)-plane. The part of this plane where the curve resides is divided into a grid as illustrated above. If the point to be mapped to a note is in the (i,j)‘th square, the note is chosen as the j‘th note in a predefined diatonic scale (in this case C-minor) with duration 2^{-i} time-units. The resulting track is saved as a MIDI-file.

The composition of the track is visualised in a video available on YouTube. Here, all three voices are shown as separate curves along with the actual track.

The Lorenz system and this mapping into musical notes was chosen to give an interesting, and somewhat linear (musically speaking) and continuously evolving dynamic. Using this mapping, the voices composed moves both fast and slow at different times. The continuity of the curves also ensures that the movement of each voice is linear (going either up or down continuously).